The first two steps should be performed on the normalized count table (i.e. Data object) before DEG designation:

1. Create a side-by-side boxplot on full data (before DEG designation)

Once the normalized count table (i.e. Data object) passes the first two steps and any inadequate normalization and/or questionable patterns have been accounted for, then the user should apply a model through packages like edgeR (Robinson, McCarthy, and Smyth 2010), DESeq2 (Love, Huber, and Anders 2014), or limma (Ritchie et al. 2015)) to obtain statistical (e.g. p-value) and quantitative (e.g. log fold change) values for each gene in the dataset. After that, the user should continue with the last four steps. For these steps, you will need the normalized count table (i.e. Data object) and the DEG designation table (i.e. Data metrics object).

3. Perform hierarchical clustering and plot the standardized parallel coordinate lines for each cluster of significant genes.

4. Plot raw and standardized scatterplot matrices for each cluster of significant genes.

5. Plot raw and standardized litre plots for each cluster of significant genes.

Please be sure you have installed bigPint before following this pipeline. First, we will read in our example data, soybean_cn_sub. This is public RNA-seq data derived from soybean cotyledon at different time points. We will consider two treatment groups (S1 and S3) that each have three replicates (Brown and Hudson 2015). We will refer to this count table as data. Check that your data object is in the format bigPint expects by refering to the article (i.e. Data object). An example of the data structure is shown below.

We will also create a standardized version of this count table, which we will refer to as data_st. In the standardized case, each gene will have a mean of zero and a standard deviation of one across its samples (Chandrasekhar, Thangavel, and Elayaraja 2012).

Next, we will generate a side-by-side boxplot of this data. We can check that the distribution of read counts (their five number summaries) is consistent across the six samples. If a user does not find that the side-by-side boxplots show consistent read count distributions across the samples, then they may wish to renormalize and/or remove outliers, using packages like edgeR (Robinson, McCarthy, and Smyth 2010), DESeq2 (Love, Huber, and Anders 2014), or limma (Ritchie et al. 2015). Here, we are setting the saveFile option to FALSE so we do not save these plots to any directory. See the article Producing static plots for more details.

Examining the normalized count table as a scatterplot matrix can help us check for normalization problems, strange geometric features that need to be considered, and problems in variability between replicates and treatments. Unlike the side-by-side boxplot, it allows us to investigate each individual gene in the data. We confirm in our plot below that:

This third case users should look out for are aberrant geometric patterns or streaks of outliers in the scatterplot matrix. Below is scatterplot matrix of public RNA-seq data from soybean leaves after exposure to iron-sufficient (group P) and iron-deficient (group N) hydroponic conditions (Lauter and Graham 2016). Notice a pronounced streak structure in the bottom-right scatterplot (green arrow) that compares two replicates from the P group.

Models cannot reveal such interesting structures that could lead to informative post hoc analyses. For instance, if this structure presented itself in data where the data collection technicians had noted an inadvertent experimental or biological inconsistency between those replicates, then a post hoc hypothesis that these genes might respond to that discrepant condition could be proposed. We note that this would only serve as a hypothesis generator; conventional genetic studies would be necessary to verify any potential role these genes have on this biological process. 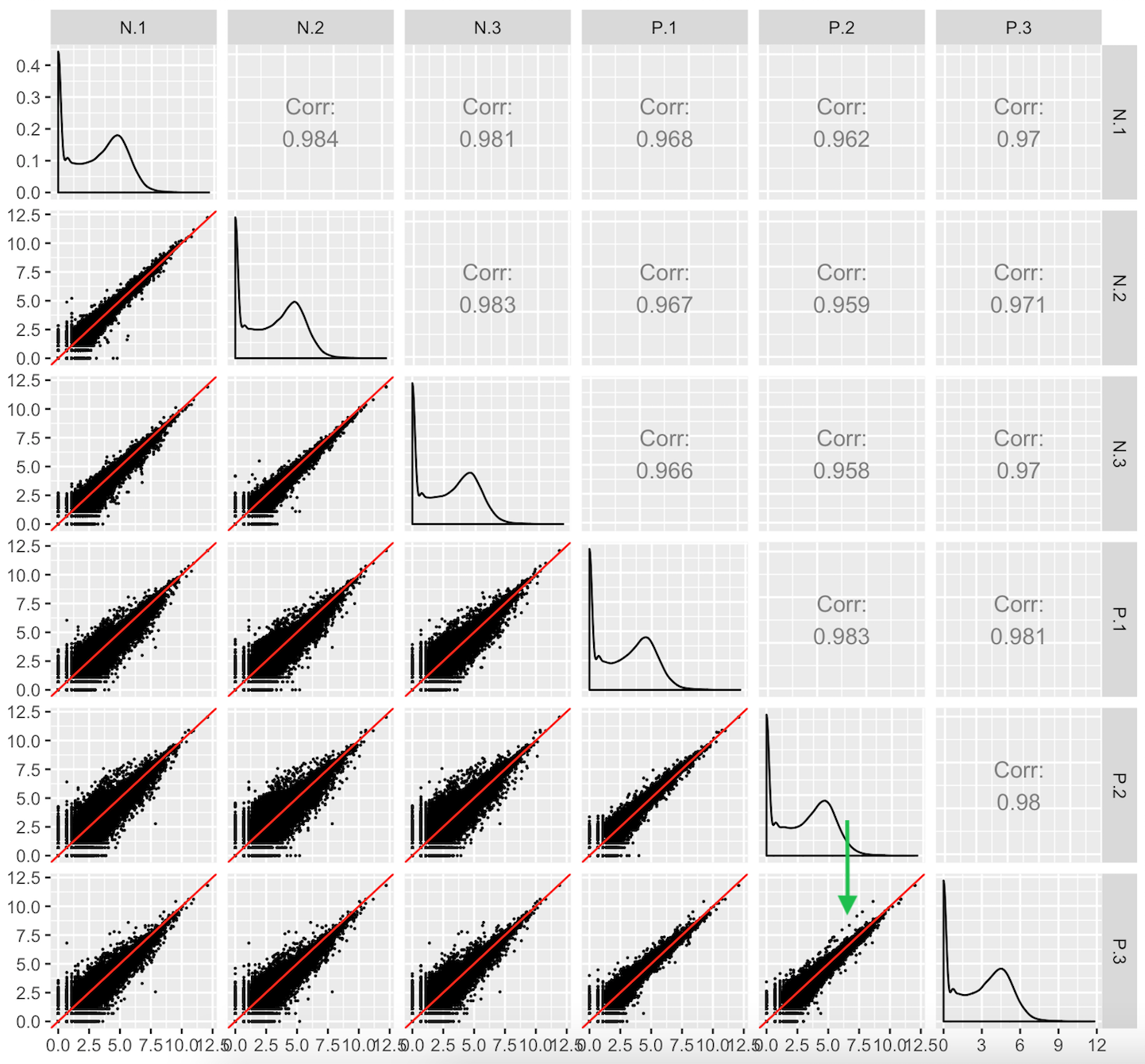 We provide another example of this third case; below is the scatterplot matrix of a public RNA-seq data of human liver and kidney technical replicates (Marioni et al. 2008). The technical replicate scatterplots look precise as is expected since this is technical data. The treatment group scatterplots have more variability around the x=y line, as we would also anticipate. However, the treatment scatterplots each contain a pronounced streak of highly-expressed liver-specific genes (highlighted as a blue oval in one example scatterplot). Some researchers have suggested that differences in the distribution of reads between groups may require particularly stringent normalization (MD Robinson and Oshlack 2010). We return to this problem in a later step. 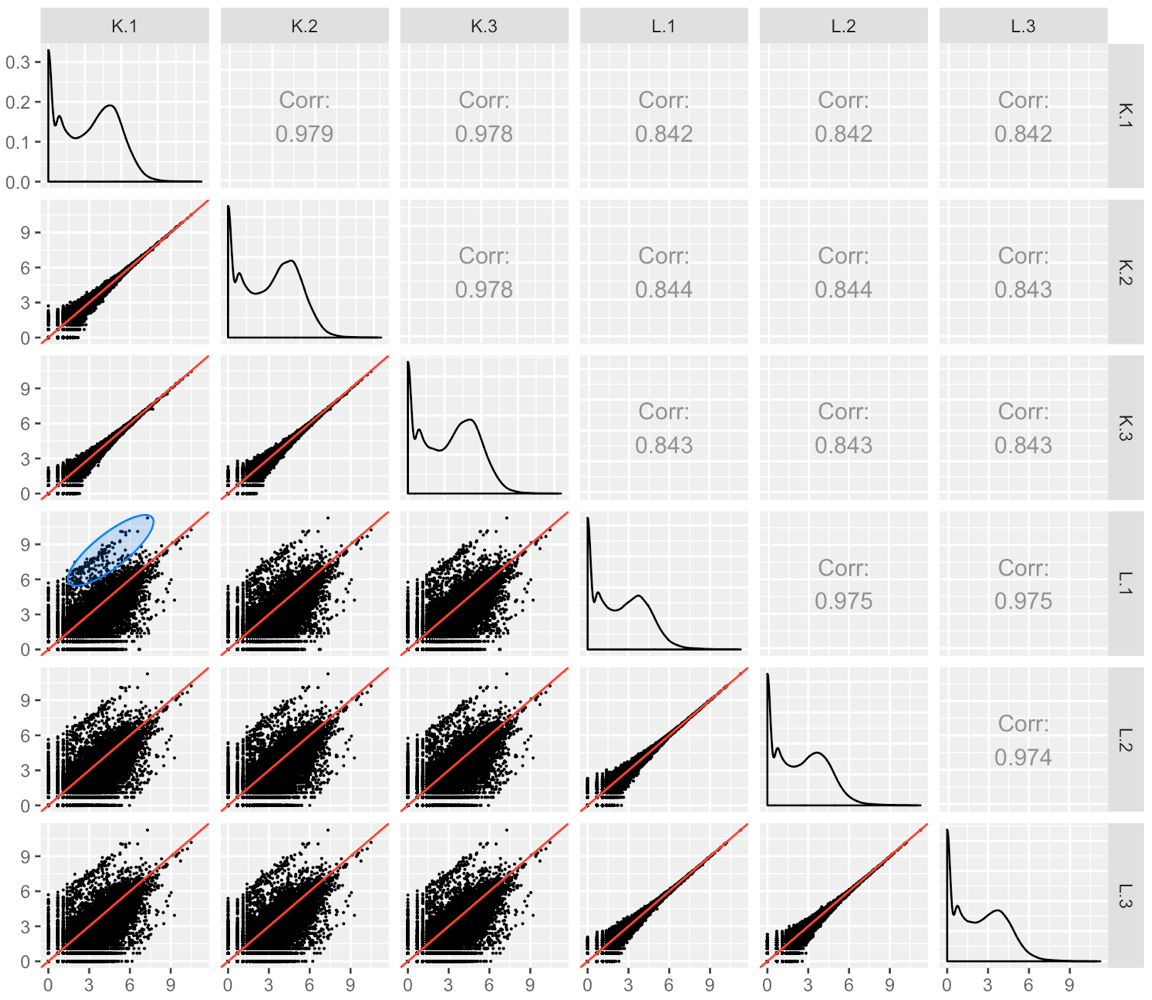 At this point, we can view our DEGs (which we consider to be genes with FDR < 0.1). Below we show a standardized parallel coordinate plot and scatterplot matrix with the DEGs superimposed in magenta. The DEGs follow the patterns we expect, which were described in the article Introduction to bigPint plots.

While the parallel coordinate plot above confirms that the DEG calls appear reliable, some users may find that superimposing all DEGs at once will create bigPint plots that are difficult to interpret. This is especially true in datasets with low signal:to:noise ratios and/or large number of DEGs. In these cases, it can be helpful to perform hierarchical clustering on the DEGs to group them into more manageable sizes of similar patterns and then examine these plots for each separate cluster. Here, we create two DEG clusters and examine their parallel coordinate plots. We see that the first cluster captured 41 DEGs with larger expression in the S1 group and the second cluster captured 23 DEGs with larger expression in the S3 group. Because we set the verbose parameter to a value of TRUE, we also generate .rds files that contain the gene IDs within these clusters in outDir, which is tempdir() by default. You can find the exact pathway of your temporary directory by typing tempdir() into your R console. We will use these .rds files in the last three steps.

The above parallel coordinate plots show reliability in the DEG designation. However, parallel coordinate plots can diagnose cases in which the DEG calls are questionable. As a case in point, we return to the public RNA-seq data of human liver and kidney technical replicates that previously showed pronounced streaks of highly-expressed liver-specific genes (highlighted in blue ovals) in its scatterplot matrix (Marioni et al. 2008). As we mentioned earlier, researchers suggest that differences in the distribution of reads between groups may require particularly stringent normalization (MD Robinson and Oshlack 2010). 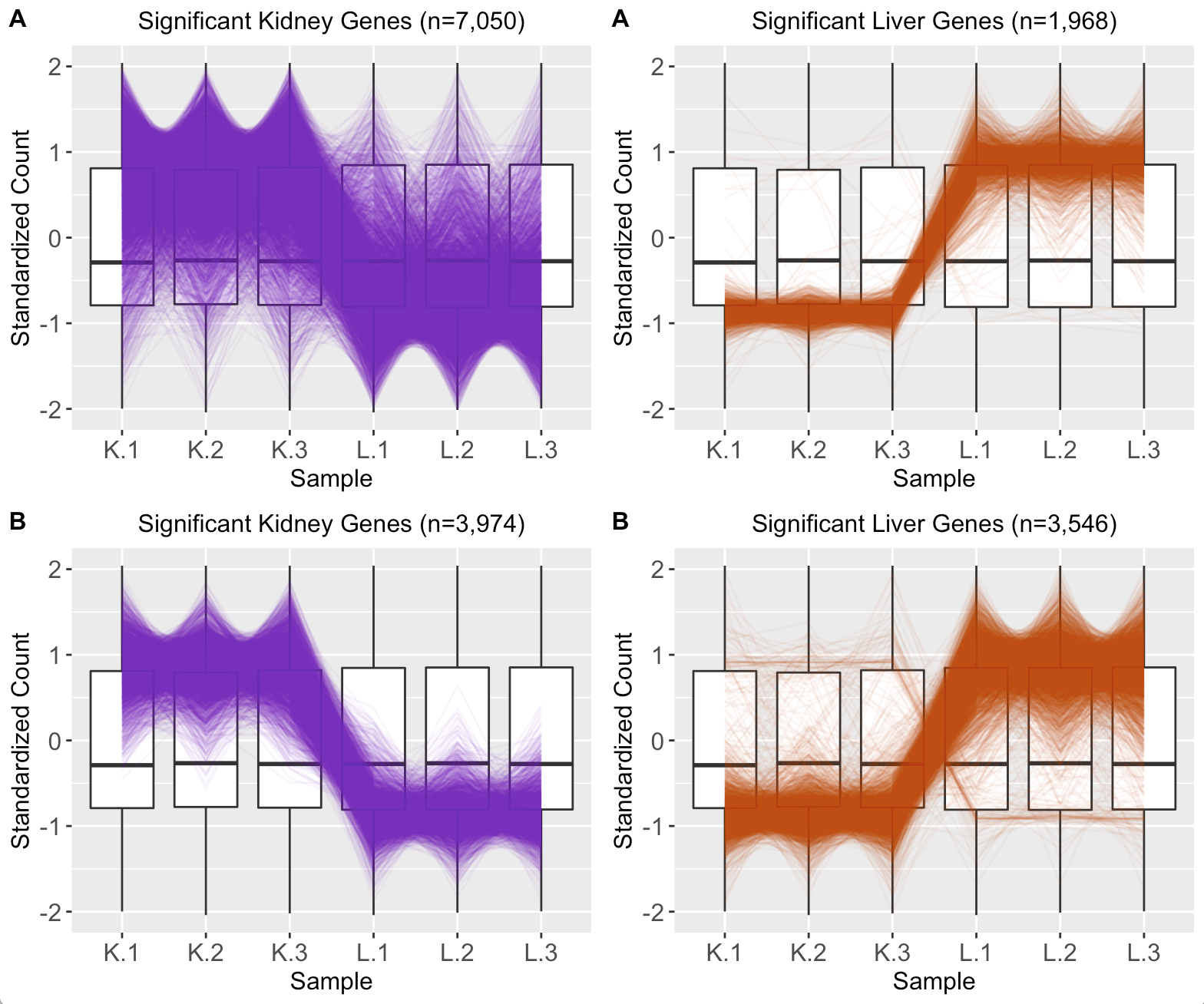 We can read the .rds files to obtain the IDs of the DEGs in the two clusters we generated in Step 3. Here, we read in the 41 Cluster 1 genes and the 23 Cluster 2 genes.

Now, we can reexamine the scatterplot matrix of DEGs for each of these clusters separately. We can maintain the same overlaying colors throughout this process.

It is useful to investigate the DEGs individually; this can be accomplished using litre plots. Below we show an example litre plot for the DEG with the lowest FDR value in Cluster 1 (ID: “Glyma08g22380.1”).

We can verify from these litre plots that these example DEGs from each cluster show the patterns we would expect from differential expression. Users can also repeat this process on the standardized data, as is shown below. Here, we also change the option parameter to plot the background data as points instead of the default hexagons.

We only investigated one DEG (the one with the lowest FDR) from each cluster. One way to enhance the usefulness of litre plots is to allow users to flip through the genes quickly and take note of any DEGs that may have questionable patterns. This is best achieved with interactivity. To accomplish this, the user can use the plotLitreApp() function. Below is an example of creating an interactive litre plot of the standardized data that allows the user to flip through all 41 DEGs in Cluster 1. The vignette will not open this application. Please run the below code to view this application.

We can also flip through all 23 DEGs in Cluster 2 by creating the following interactive litre plot.

It can also be helpful to determine how the magnitude change and significance values of DEGs compare to the rest of the dataset. Do these DEGs only show large magnitude compared to the rest of the data, or do they also have small magnitude changes? The users can quickly obtain this information in visual format using the plotVolcano() function. Below we use the default option of plotting all the data as hexagon bins in the background and we superimpose the 41 DEGs from Cluster 1.

In some cases, we may find it easier to plot all the data as individual points instead of hexagon bins. They may also wish to set the hover parameter to a value of TRUE so that they can hover over overlaid points and determine their gene IDs.